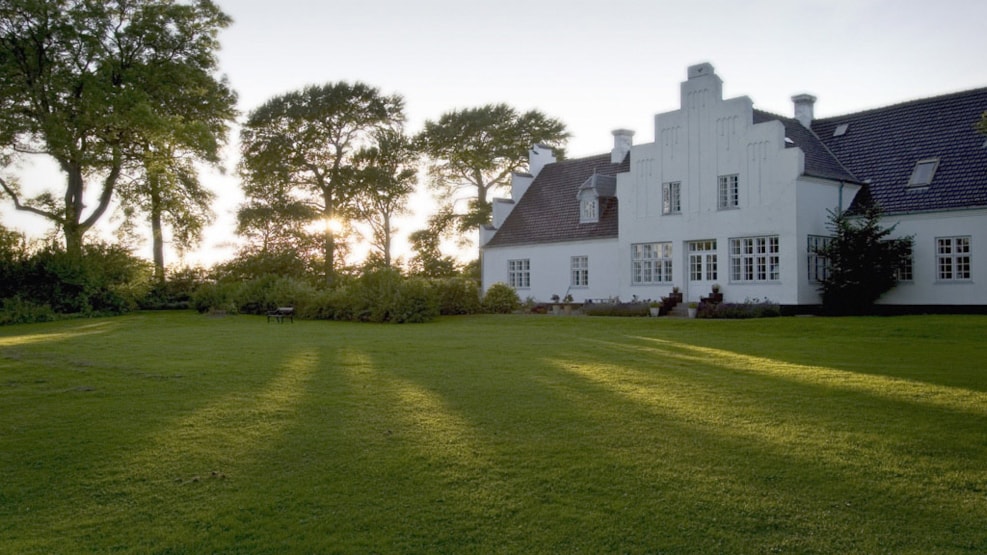 Visit the Brandbjerg Manor house, which is located a few kilometers north of Jelling in a beautiful area surrounded by forest and valley, park, lake and moat. Characteristic for the overall impression of Brandbjerg is the white simplicity and elegance. The former manor house ist today an ordinary folk high school, Brandbjerg Højskole. The hiking trail of Grejsdalstien passes just below Brandbjerg Højskole.

Brandbjerg Manor is situated a few kilometers north of Jelling, surrounded by forest, park, lake and moat. Characteristic for the overall impression of Brandbjerg is the white simplicity and elegance. Originally, Brandbjerg’s history goes as far back as the end of the fifteenth century.

The current main building was built in 1799. In 1950, the old buildings were turned into a school, where young craftsmen could learn to run their own business. Later on, Brandbjerg became an ordinary folk high school and in the 1970s, the large modernist school wing with class rooms and other rooms was added to the entirety with the older buildings. In the 1980s, a sports hall was added and in 1996, a new musical house was added as well.

Brandbjerg folk high school is probably one of the few folk high schools, which has its own ghost. The grey lady, who according to the legend walks at midnight when the moon is full, is a beautiful young daughter of the lord of the manor, who in the fifteenth century during the Swedish war resided at Brandbjerg manor. She fell in love with a Swedish soldier and decided to run away from her very dour father. But the soldier never turned up as agreed. When returning to the manor, her father forced the young girl to admit her deeds and he had her killed.

Brandbjerg means steep mountain and the folk high school is actually situated 130 ms above sea level on the edge of steep, forest-clad hills. The school owns approximately 138 acre land, most of which is covered by forest and meadows.  Brandbjerg Sønderskov is largely a natural forest. The forest is laid out as untouched forest. The 16 km long hiking route, Grejsdalstien,  from Vejle to Jelling passes just below the Brandbjerg Højskole.

The manor is closed to the public but there are regular events with public access, which are hosted by the folk high school of Brandbjerg.