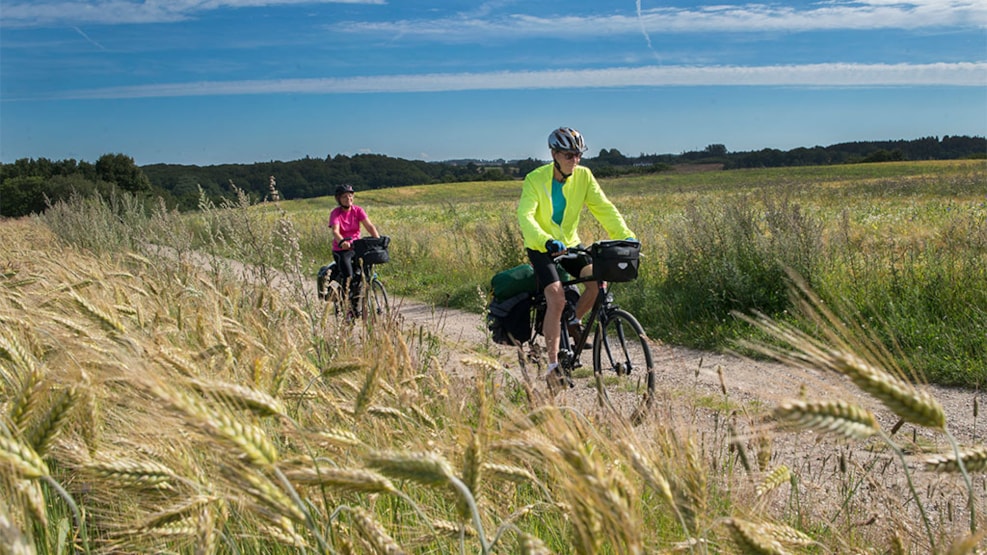 Several thousand years ago, Jutland's main road, The Ancient Road (Hærvejen), followed the rivers up through the country. Today, The Ancient Road, national route 3, is a popular cycling and hiking route through Jutland's most scenic landscape. You are invited to visit the attractions in Jelling and Vejle along the way from Nørre Snede to Bække such as Kongernes Jelling. The hiking and cycle route is approx. 62 km.

The Ancient Road (Hærvejen, national route 3) from Nørre Snede to Bekke, passes through some of Jutland’s most scenic landscapes. Visit the attractions along the way, such as the Jelling Monuments. The hiking and cycle route is approx. 62 km.

Thousands of years ago, before cars filled the roads and before railways linked the major cities, the largest thoroughfare through Jutland followed the rivers. Wandering here were people from all walks of life - pilgrims, robbers, noblemen, beggars, artisans, traders, drovers with their cattle and kings with their armies.

The Ancient Road (Hærvejen) was never planned. It was a trodden track that wound through the landscape where the seasons permitted people to pass. A network of humble gravel roads and wheel tracks taking you from town to town, the Ancient Road was one with the landscape. From northern Jutland to the German border and on into the wider world the wheel tracks carved their way through unspoiled and rugged scenery. Today’s cycling and hiking trails thus originally consisted of a network of mud tracks and gravel roads.

On your trip from Nørre Snede to Bække you pass some of Jutland’s most scenic landscapes. The 62-km journey can be expanded by taking the regional cycle routes Bindeballestien and Engelsholmruten and visit the town of Vejle. The journey is around 35 km.

The map guide ’The Ancient Road – a guide for ramblers and cyclists’ is available from book stores and via the Internet.

The route’s attractions (north to south)
The countryside around Rørbæk Sø (lake) features woodlands, meadows, pine plantations and heaths. You also find the wild oak forests of Tinnet Krat and Kollemorten Krat, which are among Denmark’s largest. Toward the south you find Margrethediget, a 150-metre rampart perpendicular to the Ancient Road. There are designated areas for campfires and barbecues. There is also put & take fishing and canoe rental.

East of the Ancient Road you find the springs of two of Denmark’s largest rivers - Gudenåen and Skjernåen – just a few hundred metres apart in the same valley.

Øster Nykirke is the church in Denmark located at the highest altitude (127 metres above sea level). The church was constructed between 1150 and1200 AD to serve pilgrims travelling to the spring of Saint Peter – Sct. Peders Helligkilde – just East of the church (a small well reconstructed in Medieval style).

GIVSKUD ZOO is a five-starred safari park experience. Get close to more than 700 different species from around the world with the safari bus. Visit the large gorilla habitat, the African village, the jungle gym and much more.

Harresø Kro, a historic inn of royal privilege located south of Givskud, is considered one of the oldest inns along the Ancient Road, dating from 1609. Here you can experience the old stables and the regular table of one of Denmark’s most influential thinkers, N. F. Grundtvig.

Jelling features some of Europe’s finest Viking Age monuments: Denmark’s two largest royal burial mounds and two rune stones with the oldest runic inscription bearing reference to the nation of Denmark. This is the final resting place of King Gorm the Old and this is where King Harald Bluetooth introduced Christianity in Denmark. The monuments and Jelling Church enjoy UNESCO patronage. The Kongernes Jelling experience and visitor centre lets you explore the world of the Vikings and the history of the Jelling Monuments through interactive exhibitions.

The scenic surroundings of Fårup Sø (lake) include numerous natural springs, wide woodlands and open meadows. Along the eastern bank you find a campsite, an inn, a place for redalos and rowing boat rental, a kiosk and good summer fishing opportunities – and even a reconstructed Viking ship.

Nørup Kirke (church) features Baroque interiors and has an onion-shaped spire, as has Engelshom Slot (castle) on the opposite side of Engelsholm Sø (lake). Engelsholm Slot (castle) is today a folk high school but the estate gardens are open to the public.

The protected Randbøl Hede is one of Denmark’s largest inland sandy heaths. In the pine plantations of Frederikshåb Plantage you can experience areas of heath and the “Seven year lakes”. East of Randbøl Hede (heath) you find the rune stone Store Rygbjergstenen, which carries what is believed to be Denmark’s first love poem.

In the scenic valley of Randbøldal you find the Randbøldal Museum, which is a heritage activity and visitor’s centre for waterpower and arts and craft. And in the valley of Vejle Ådal you find a reconstruction of the 750-metre bridge Ravningbroen from the Viking Age. An exhibition about the bridge is to be found at Ravning Station.

Bindeballe Station features an exhibition on the history of the Vandel railway line. Here you also find kitchen, WC and showering facilities for ramblers and cyclists and a small campsite. Bindeballe Købmandsgård from 1897 is a charming old-fashioned general store with Denmark’s largest merchant museum, a pavilion, cabins for rent, etc.

The Egtved Girl’s Barrow is one of Denmark’s best-preserved Bronze Age graves. Today the site features a reconstructed barrow and a small museum that relates the story of the grave.

Hamborggårdstenen is a 50-ton glacial rock that was carried with the icecap from the lakes of Åland 15,000 years ago. Legend has it that King Harald Bluetooth was preparing to haul the stone to Jelling when he was told that his son, Svend Forkbeard, had rebelled and he then left the stone.

Klebæk Høje is one of the most inspiring prehistoric monuments along the Ancient Road. In the Bronze Age, about 3,000 years ago, two barrows were erected here, which later in the Viking Age were extended with a 45-metre long stone ship.

The Bække Church rune stone was found in the cemetery dike in 1807, the stone is dated to 925 and features the runic inscription: “Tue Ravnsunge and Funden and Gnyble, the three made Thyre’s barrow.”